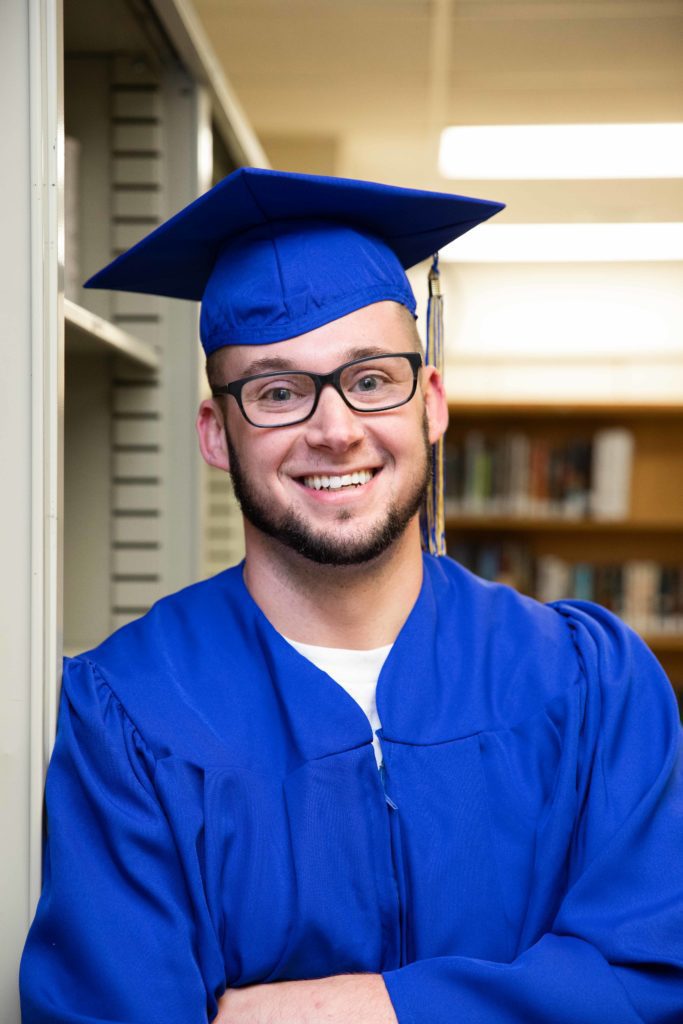 Great Bend, KS- Thirty-one-year-old Larned Correctional Mental Health Facility (LCMHF) resident Tyler Lyon has earned his high school diploma and other career-related certifications through Barton Community College and in the summer of 2025, after six years, he will rejoin society educated and ready to work. He is committed to not becoming reincarcerated, a trend known as recidivism.

“I think the biggest thing my Barton experience has given me is confidence,” he said. “Confidence in myself, to know that if there’s something that I set my mind to, I can accomplish it. It took a lot of people, my teachers, Mrs. Barr, pretty much everybody that’s been on this staff to say, ‘We see more in you than where you’re at right now.’  They kept pushing me and encouraging me.”

Lyon joined 47 of his peers Wednesday at the LCMHF Learning Celebration to recognize educational achievements as part of Barton’s Building Academic Skills in Correctional Settings (BASICS) program. A total of 144 workforce training certificates, industry certifications and diplomas were awarded. Barton has been committed to working with the Kansas Department of Corrections (KDOC) to provide education in correctional settings since 2001 because it is a proven method to reduce recidivism.

People might not always sympathize with someone who has been to prison but Lyon said he’s ready to prove to society that residents can have value upon release.

“I thought my life was over,” he said. “Nobody in my family has ever been down this path, but leaving prison, whether it be juvenile or adult, with even just a high school diploma, increases your opportunity to stay free. If you continue adding on skills like welding, it just increases the probability of success when you leave this setting. I’m ready to get home so I can show people that there are a lot of guys in here that have talents and skills and abilities that are worth something in society.”

Lyon plans to get his associate degree next and eventually a bachelor’s degree in business and go into construction project management because he loves numbers but also enjoys the hands-on aspect of construction.

“I would love to travel and be able to work in project management because I’d be able to empathize with someone that’s maybe out there working with their hands every single day and apply strategies when formulating plans that make sense for them and the business.”

Barton Community College has partnered with both LCMHF and Ellsworth Correctional Facility (ECF) to bring educational opportunities to residents. Tuition and fees are funded either by the families of residents or private donations from citizens who have recognized the program’s significant benefits to society.

The KDOC states the recidivism rate for Kansas is just above 34% and education has been identified as having a tremendous impact on reducing recidivism, which ultimately saves taxpayers money.

According to a report by the Vera Institute of Justice and the Higher Learning Commission, a 2013 RAND Corporation analysis estimating the aggregate effects of education programs in prison showed program participants had 43 percent lower odds of recidivating and 13 percent higher odds of obtaining employment upon release compared to those who did not participate. Additionally, the analysis found that the three-year return on investment for taxpayers is nearly 400 percent, or five dollars saved for every dollar spent. A 2018 RAND study updated the reduction in the odds of recidivism to 48 percent.

For more information on the Barton BASICS program, visit bartonccc.edu/breakthecycle.