White Specks May be Indication of Pine Needle Pest 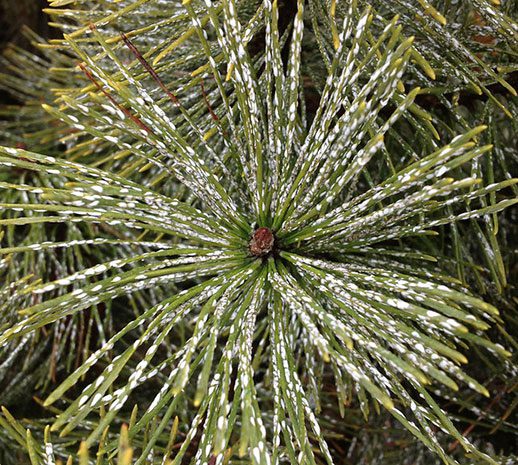 “Pine needle scale is an armored scale that is found across the United States but especially in the eastern half of the country,” Upham said. “Though both females and males are white, the female is larger (1/8 inch long). Crawlers – juvenile scales – are bright red to purple to brown.”

Upham said the pests are not to be taken lightly; if left to infest the pine, they can suck the sap from the leaves, causing them to turn an unsightly yellow and brown.

Since females lay eggs in two generations, the first, May to early June and the second, mid- to late-July, Upham advises homeowners to start control now.

“Use a hand lens to look for crawlers” on the leaves, he said.

He recommends wrapping a group of needles with double sticky tape or white tape/colored electrical tape smeared with petroleum jelly. He advises picking a color that crawlers will show up on — not red, purple, or brown.

If crawlers show up on the tape, spraying can begin. According to Upham, insecticides that are effective against the pest include:

These insecticides must be applied to crawlers soon after they emerge. Upham said once they have grown into a scale and formed its protective waxy cover, insecticides will be ineffective.

Upham and his colleagues in K-State’s Department of Horticulture and Natural Resources publish a weekly Horticulture Newsletter with tips for maintaining home landscapes. The newsletter is available to view online or can be delivered by email each week.

Interested persons can also send their garden- and yard-related questions to Upham at wupham@ksu.edu, or contact your local K-State Research and Extension office.