Cattle Chat: Impact of Drought on a Fall-Calving Herd 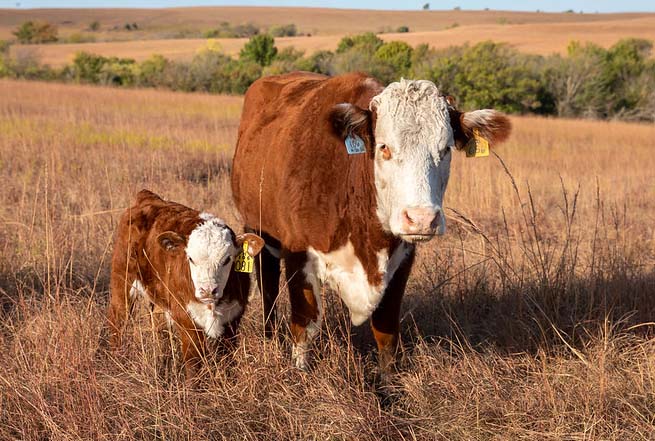 Along with the landscape disadvantages, a lack of rainfall is detrimental to establishing crops and growing pasture grass, which can lead to negative consequences for the beef cattle that graze those fields and pastures, said experts at the Kansas State University Beef Cattle Institute.

Speaking on a recent Cattle Chat podcast, nutritionist Phillip Lancaster said a drought can be especially challenging for a fall-calving herd.

“A drought is a real disadvantage to the fall-calving cows because the summer pastures dried up sooner than typical due to lack of rain, which impacted the amount of body condition they were able to carry,” Lancaster said.

In a normal year, fall-calving cows are typically around a score of six (on a 1 to 10 scale, with 1 being emaciated and 10 being morbidly obese), he said.

Lancaster said many of those cows are coming off summer pastures at a lower body condition score and at the same time the nutritional demands on them are peaking due to the lactation requirements from the nursing calf. This is also coupled with a time when feed costs are high.

“In this drought year, producers are going to have to supplement fall-calving cows with energy and protein along with roughage to meet her needs, and doing that in a cost-effective manner is going to be difficult,” Lancaster said.

Another option is to look at relocating the herd to an area of the country that has more readily available grass and feedstuffs, said K-State veterinarian Brad White.

“You’ll need to do that math to see if relocation is a viable option for the herd,” he said.

Another option is to reduce the herd size by selling some of the cows.

“As painful as it is, reducing the number of mouths to feed will help extend your feed resources,” White said.

To hear the full discussion, listen to the Cattle Chat podcast online.