Kansas is Geared Up for a Bitter, Battleground Abortion Fight after Roe Falls 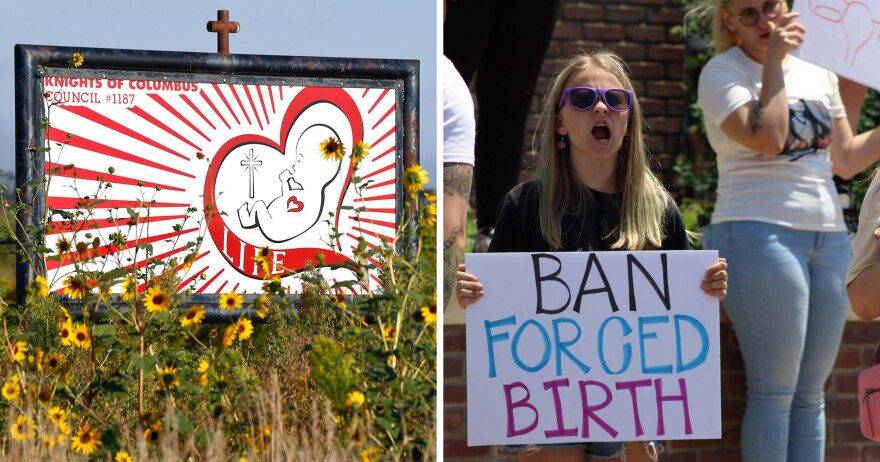 Topeka, Kan. — A state already gearing up for voters to decide whether to strike abortion rights from the Kansas Constitution reacted with both glee and dismay at the U.S. Supreme Court overturning the 49-year-old Roe v. Wade precedent on Friday.

The high court left states relatively unfettered to limit, and even ban, abortion. That holds a particular impact in Kansas — which once again finds itself a national battleground on the forever-contentious issue.

Already, Kansas stands as an abortion refuge in a region where women have been traveling from Missouri, Oklahoma, Texas and even farther in search of services at women’s health clinics in Overland Park and Wichita.

“We have seen this play out in our own clinics in Oklahoma and Kansas,” Trust Women said in a statement, “all while Roe remained the law of the land.”

Trust Women’s Wichita clinic has been the target of national protests for decades. Its former director, George Tiller, was killed in 2009 by an anti-abortion zealot. The clinic’s name is drawn from a quote from Tiller.

Meantime, voters are set to decide in the Aug. 2 primary whether to amend the Kansas Constitution to trump a state supreme court ruling from 2019 that found a right to abortion in the state. Even voters who don’t belong to a political party can cast ballots.

“The power and responsibility to decide the important and difficult questions involving regulation of abortion have been returned to the people,” Kansas Attorney General Derek Schmidt, a Republican running for governor, said in a statement. “The people of Kansas will speak directly to this subject in less than six weeks.”

Reaction among those opposing the amendment to the state constitution rang equally strong.

“This is a shameful decision,” said a statement from Kansans for Constitutional Freedom. “(It) eliminates the rights of American women. It puts their lives at risk and sends a strong message that they are not worthy of equal rights.”

For much of the reliably conservative Republican state, the decision was greeted as a reprieve for the unborn. For Democrats and some more moderate Republicans, the high court’s ruling felt like an assault on women and their autonomy over their bodies.

The decision falls barely a month before the state’s primary, as at least $5 million has poured into the state for campaigns to pass or defeat the amendment, according to the Sunflower State Journal.

If the amendment is approved, the Republican conservatives who control the Legislature would have wide latitude to make abortions increasingly difficult to get in Kansas.

“If Value Them Both (as the proposed amendment is called) passes and the Legislature is able to pass abortion regulations, I think clinics like Trust Women and Planned Parenthood in Wichita will just be out of the business of abortion services,” said Neal Allen, who chairs the political science department at Wichita State University.

“We are a few months away,” he said, “from a situation where things are like they were prior to Roe v. Wade, and women will be traveling hundreds, if not thousands of miles for services, or getting services through illegal means.”

Until then, he said, Kansas can expect women from out of state to come to Kansas for abortions in rising numbers. Both Missouri and Oklahoma, for instance, have “trigger laws” on the books effectively banning the procedure once the Supreme Court said such laws were legal again.

Abortion rights opponents cheered much in the decision — its ditching of the rights established in the 1973 Roe decision, its elevation of states’ abilities to make their own rules and the way those two factors could spell an end to abortion in Kansas.

“The U.S. Supreme Court restored the people’s ability to come to individual consensus on abortion limits,” said a statement from the Value Them Both Coalition. “At this historically important time, the question before Kansans on August 2nd is clear: an unregulated abortion industry with no limits at all or the reasonable limits protected by” the proposed amendment.

Reflecting much of the political class of Republicans in the state. U.S. Rep. Ron Estes of Wichita cheered the court’s decision.

“This gives a new voice to the majority who want common-sense laws that protect mothers and babies,” the congressman said in a statement.

Shannon Pahls, the executive director of the Kansas Republican Party, called the decision “a tremendous victory for life. The Supreme Court correctly returned the right to regulate abortion back to the people and their elected officials.”

“It’s a long time coming,” said Lance Berland, a volunteer with the Kansas Coalition for Live. Roe v. Wade “was an overreach by a court of nine men back in 1973. I was born in ‘74, so I consider myself a Death Row survivor.”

And while one side of one of the most divisive cultural issues splitting the country — national polls tend to show a slim majority for some sort of abortion rights, and a larger majority opposed to overturning Roe v. Wade — the other side was both braced and upset. While the amendment is expected to pass, a survey of Kansans suggests most still support some form of abortion rights.

“Abortion is a personal decision,” state Sen. Dinah Sykes said in a statement. “The right to abortion is protected by the Kansas Constitution, and we’ve got to keep it that way.”

Micah Kubic of ACLU of Kansas said the court’s ruling “will force millions of people into a life-threatening public health crisis (and force women) into a second-class status (that) denies them control over their own bodies. … No one should be forced to carry a pregnancy against their will.”

At a press conference over Zoom, Emily Wales, president and CEO of Planned Parenthood Great Plains, called the decision “beyond devastating.”

“People have fewer rights today than they did yesterday,” she said. “We are receiving so many questions today, ‘what can I do?’ The answer is Kansas. If you are a Kansan, educate yourself about what is at stake and vote on August 2.”

Both sides agreed Friday’s ruling raises the stakes for that Aug. 2 vote.

If the amendment passes, the Legislature could theoretically rush back to Topeka for a special session to impose new abortion restrictions. Democrat Gov. Laura Kelly, in the midst of an uphill reelection fight, would likely veto such attempts — but she’s been overridden before.

Allen, the Wichita State political scientist, suspects a special session when lawmakers will be in the midst of their own reelection campaigns is unlikely. But he said the nation’s eyes will first be turned to Kansas and primary voters’ decision on the amendment.

“It is the first chance that voters will have to make an authoritative vote on abortion after the Supreme Court’s decision,” Allen said. “Kansas will be a kind of laboratory for abortion electoral politics for the next few decades.”