Kansas School Board Rejects Commissioner’s Resignation, Suspends Him for 30 Days 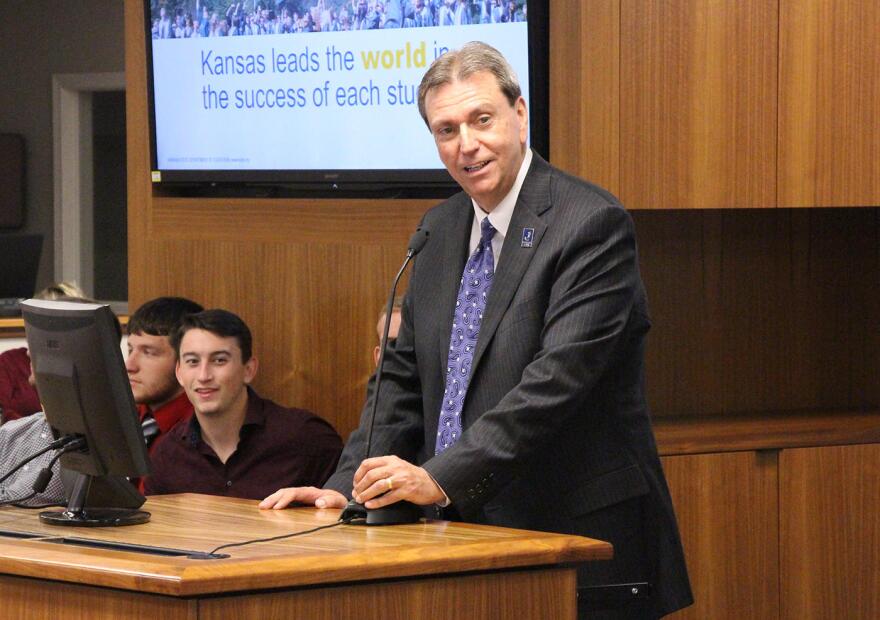 Wichita, Kan. — The Kansas Board of Education rejected a letter of resignation from Commissioner Randy Watson on Friday, instead opting to suspend him without pay for 30 days.
The action came after Watson made a comment about Native Americans during a conference last week that some people criticized as racially insensitive. Gov. Laura Kelly and some lawmakers called for Watson to resign.
“All of us received numerous correspondence yesterday from people, overwhelmingly supportive of Dr. Watson,” board president Jim Porter said Friday.
“We realize that there are those people that are going to be upset by this decision. We recognize that. But we also think it is critically important for us as leaders to reach out to those people and start rebuilding relationships. Because the bigger issue is the fact that people are being discriminated against or treated unfairly in schools, and that is something that is our absolute responsibility to show leadership on.”
Watson submitted a letter of resignation to the State Board of Education Friday morning. That letter has not been made public.
The state board met in a private session for about an hour Friday. Afterward, board members voted unanimously to reject Watson’s resignation and suspend him for 30 days without pay, beginning Monday.
Deputy Commissioner Craig Neuenswander will serve as acting commissioner during the suspension.
Following Friday’s meeting, Porter said board members considered Watson’s “entire history” before making their decision.
“We believed that this particular incident was serious and needed to be addressed. We didn’t feel like it was career-ending,” he said. “We believe in restorative justice. … It is absolutely critical that we use this as a learning and teaching opportunity, and we felt strongly that we are better able to do that under his leadership.”
Before the private session, Porter criticized the governor and others for publicly calling for Watson to resign.
“That is not their responsibility,” he said. “A more appropriate action would have been to contact the responsible party — in this case, the Kansas State Board of Education — with their recommendations.”
In a statement Friday afternoon, the governor’s office said Kelly has requested a meeting with Porter and Watson to discuss how to move forward after the board’s action.
Porter said he and other board members had “many contacts” about Watson, “with most of them … recognizing his significant accomplishments and asking us to continue to support him.”
Watson made a remark during a conference on virtual education last week:
“I had some cousins in California. They were petrified of tornadoes. They’d come visit us, you know, in the summer. They’re like, ‘Are we going to get killed by a tornado?’ And I’d say, ‘Don’t worry about that. But you gotta worry about the Indians raiding the town at any time,” Watson said.
“And they really thought that, you know? Grew up in California, I guess you don’t know much of the history of Kansas.”
Among the people calling for Watson’s resignation were three Native American Kansas legislators and Joseph Rupnick, chairman of the Prairie Band Potawatomi Nation.
Porter said Friday that the episode highlights a need to address issues of diversity and discrimination in Kansas schools. He said the board would talk about the topic at its next meeting.
“If we believe that Kansas needs to lead the world in the success of each student, it is critical that each student is valued and welcomed and feels comfortable and honored in that school environment,” Porter said. “We have work to do, and so we intend to lead that process.”
Porter said on Friday that he found it ironic that Watson was asked to resign.
“There are a number of people in this state in elected and executive positions who have actually been arrested for various illegal activities, but they have some things in common,” Porter said. “All were given the opportunity to participate in due process and had the opportunity to be heard in the appropriate forum.
“Some did not take responsibility for their actions. Some blame others for their actions. Another thing they have in common is that they all remain in their position with no or limited consequences. It seems ironic to me that Commissioner Watson, who owned and did take responsibility for his statement, which was not illegal, feels … forced to resign by outside forces.”
Watson was named education commissioner in November 2014 and took over the position in 2015. He previously served as superintendent of McPherson public schools.
During his tenure with the Kansas Department of Education, Watson introduced the “Kansas Can” vision for education, which focuses on social-emotional education, kindergarten readiness, civic engagement and individual plans of study.
Watson also helped launch the Kansas Can School Redesign project, which encourages public schools to reinvent themselves around personalized and project-based learning.
Suzanne Perez reports on education for KMUW in Wichita and the Kansas News Service. You can follow her on Twitter @SuzPerezICT.
The Kansas News Service is a collaboration of KCUR, Kansas Public Radio, KMUW and High Plains Public Radio focused on health, the social determinants of health and their connection to public policy.
Kansas News Service stories and photos may be republished by news media at no cost with proper attribution and a link to ksnewsservice.org.
PrevPreviousKDHE issues Health Advisory, Safety Tips Ahead of Flint Hills Burning Season
NextRiley County Mourns the Loss of Greg McHenry, County AppraiserNext