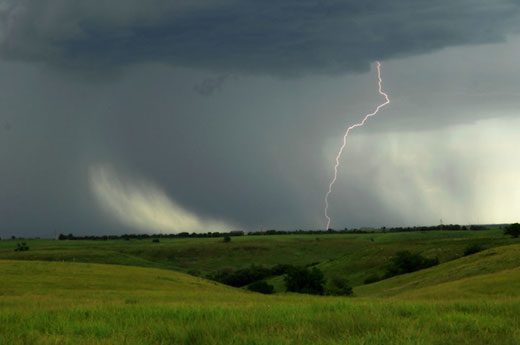 Manhattan, Kan. — There is a common joke in Kansas – and many parts of the country – that goes something like this: If you don’t like the weather right now, just wait a few minutes.
Kansas State University meteorologist Chip Redmond agrees that weather in Kansas can change pretty quickly, so it’s important to know what to do in any situation in order to remain safe.
“It starts with preparedness,” said Redmond, who is also manager of the Kansas Mesonet. “We all should have a plan, including such things as just knowing how you get your weather alerts. You may get those from a weather radio or other sources, such as news media. And then, you need to talk with your family.”
The National Weather Service has declared March 7-11 as Severe Weather Awareness Week across the country, encouraging all people to practice what they would do if faced with a real weather emergency.
“Practicing and having a plan saves lives,” Redmond said. “That is especially true in rural areas where appropriate shelter may be many miles away, a scenario many Kansans may be in.”
Redmond said having a “Go” bag  — something you can quickly grab and take to a shelter — is important for most weather emergencies. The bag should include such items as medicines, extra clothes, radio, food, water and even something to keep kids entertained.
The best place to wait out severe weather “is always the lowest,central location in the home,” Redmond said. “If you only have a first floor – and not a basement – the ideal spot is a centrally located hallway or bathroom. Stay away from windows.”
If caught outside, “don’t go under trees and don’t try to out-run tornadoes in your car,” Redmond said.
“A ditch, believe it or not, is a really safe place to go if you’re outside. Get down in the ditch; debris will typically blow over you. If you’re in a place without a ditch, get down on the ground as low as you can so you don’t have things hitting you.”
For specific weather emergencies, Redmond shared additional tips:
Lightning

“You don’t want to be operating anything that can carry electricity, whether it’s water or wire,” Redmond said. “If there’s a lightning strike on something away from your house, it’s going to travel through that source.”
Tornado
On average, Kansas has 95 tornadoes per year, though only 17 were reported in 2020; the most the state has ever had was nearly 200 in 2008.
“This is tornado alley for a reason,” Redmond said. “We need to be prepared and be knowledgeable about what to do when a tornado warning is issued.”
The peak time for tornadoes in Kansas is April through June, often referred to as tornado season. But Redmond said tornados can occur any time of year and are solely dependent on atmospheric conditions – spring provides a classic clash of southern winds with Gulf moisture meeting north winds with colder, drier air from the Arctic areas.
A basement or lower level of the house – away from windows — is always the safest spot to wait out a tornado warning.
High winds
Redmond said Kansas gets approximately 600 wind damage reports annually. High winds – defined as those over 55 miles per hour – create problems not only by downing trees, but by making driving conditions and visibility more difficult.
As with tornadoes, the safest place during a wind storm is inside in a central location, away from windows.
Hail
In an average year, there are more than 1,000 reports of hail in Kansas. Severe hail is defined as 1 inch or more in diameter. “That seems fairly small until they’re coming at you at a high rate of speed from the sky,” Redmond said.
One inch hail can cause damage to roofs and cars and even rip siding off the side of a house.
“And it can threaten your life,” Redmond said. “If you get hit with multiple hail stones at 1 inch diameter, you’re going to know it. And if you get hit in the wrong place, it can kill you.”
Flooding
It’s much easier to prepare for flooding while at home, Redmond said. “All you really need to know is your proximity to a flood plain,” he said. “To determine your risk, know the low-lying areas and where water runs.”
Away from home – and especially when driving – the risks due to flooding are much greater. On the road, the best advice is “turn around, don’t drown,” according to Redmond.
“The reason for that is you might see water over the road, and it may look like just a little bit, but it can be moving at a high rate of speed,” he said. “Six inches of water can move a car effectively.”
In addition, the road under the water may not be intact, he said.
More information about staying safe during many weather emergencies is available online from the National Weather Service.