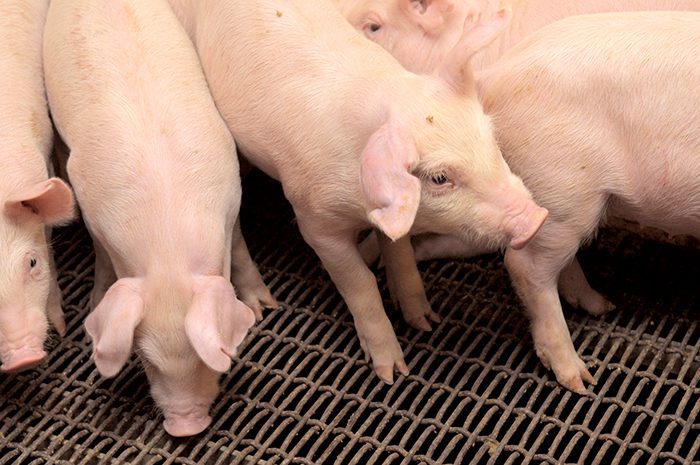 Manhattan, KS — A Kansas State University swine nutrition student is conducting research that focuses on potential alternatives to zinc oxide, a common ingredient in the diets of weaned pigs, in a project he says may contribute to the swine industry’s goal of improving the efficiency of pork production and animal welfare.

“Pharmacological levels of zinc from zinc oxide have been shown to improve growth performance and health status of the newly weaned pig,” said graduate student Ethan Stas. “However, there are growing concerns with the use of pharmacological levels on zinc in swine diets because of environmental concerns.”

Stas – who is working with feed ingredients with an acid binding capacity at a pH level of 4 (known as ABC-4) — noted that the European union has already banned the use of pharmacological levels of zinc and said that North America may follow a similar path.

The gastrointestinal tract of newly weaned pigs is not fully developed and they cannot produce sufficient amounts of hydrochloric acid in the stomach to maintain a low pH, Stas said.

Stas describes the concept of ABC-4 as incorporating low acid-binding ingredients in weaned pig diets to try and maintain a low stomach pH and improve health status and growth performance.

“We conducted a study evaluating a low ABC-4 diet compared to a high ABC-4 with or without zinc oxide,” Stas said.

In Stas’ research, pigs were fed diets containing varying amounts of ABC-4 and zinc oxide for 21 days after weaning, with growth performance and health status evaluations from day zero to day 42.

“The study showed that when zinc oxide is present in the diet, there is no difference between ABC-4 level in terms of growth performance or mortalities/removals,” Stas said. “However, when zinc oxide is not present in the diet, pigs that were fed the low ABC-4 diet had improved growth performance and lower mortalities/removals than pigs fed the high ABC-4 diet.”

Stas believes this is a viable option for swine producers when pharmacological levels of zinc are banned from the diets of pigs. Utilizing low ABC-4 diets could assist producers in improving growth performance and health status when zinc oxide in not in the diet.

“Often times, pigs struggle for the first few weeks after weaning and I think improving performance and health status by utilizing ABC-4 diets is a large opportunity in the swine industry to improve efficiency,” he said. “We should always be thinking about potential ways to improve the welfare of the pigs we raise and if a low ABC-4 is able to improve health status and save more pigs, then it should be considered.”

Stas said ABC-4 will require further research to find the optimal level for a given weight range of a pig, evaluating how ingredients influence the ABC-4 level of the diet, and the role that water intake plays in maintaining a low stomach pH.

Stas’ research will be featured during K-State’s annual Swine Day, set for Nov. 17 at the K-State Alumni Center. Registration for that event is now open and costs $25 for those who sign up by Nov. 10; the cost on the day of the event is $50.

More information is available at https://www.asi.k-state.edu/events/swine-day/, or contact Lois Schreiner at 785-532-1267 or lschrein@ksu.edu.