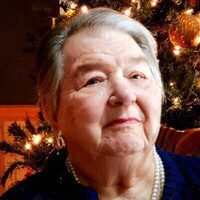 She was educated in the city schools and graduated from Clay County Community High School in 1945. Following graduation she worked in the office of G. W. Bale, MD for 4 and a half years.

On August 8, 1949, she married Ervin E. Fowles, and they farmed eight miles south of Clay Center until 1954 when they moved to Van Nuys California and later opened a Printing Business in Glendale. In 1960 they returned to Clay Center and owned and operated Midway Printing until retirement in 1986.

Dorothy was a member the American Legion Auxiliary for 32 years and served as President in 1990. She was also a member of the Leisure Center and served once as President of that organization. She also volunteered her time working at the Clay County Museum. She sometimes was invited to talk to Grade School Children about the Depression and growing up in those times.

Just one of Dorothys favorite songs she would sing or whistle in her younger years was Zip a Dee Doo Dah. She always had a caring heart for others and loved her Card Games and Bingo with friends. She enjoyed life, its people and history of Clay Center. We will always remember growing up on Lane Street and the good memories she gave us.

Memorial services will be held at 11AM Saturday, December 17, 2022, at Neill-Schwensen-Rook Funeral Home