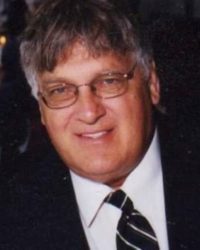 Lloyd was born February 25, 1944, in Marysville, Kansas the son of Mary Isabelle (Floyd) and Lawrence Robert Hull.  Lloyd attended Irving Grade School until the family moved to Waterville due to the construction of Tuttle Creek Reservoir and Dam.  He graduated from Waterville High School in 1962.  He was married to Jill Peterson on March 20, 1964 at the United Methodist Church, Waterville, Kansas.

Lloyd worked various construction jobs including the dike at Blue Rapids, the roads around Winkler, Kansas, airport runway construction in Kansas City, and did multiple plumbing jobs for his brother Bob Hull.  He started working for Georgia Pacific in 1969 and retired in 2008.

Other than his family, Lloyd enjoyed giving everyone a hard time, joking and talking with anyone who would listen to him.  He and Jill traveled the world while their health allowed it.  They hit all the states, South & Central America, most of the countries in Europe, Australia and Canada.  They loved guided bus tours and Holland American cruises.

Lloyd was an avid Lady Mustang supporter.  From junior high to senior high, volleyball and basketball you could probably find him there cheering them on and critiquing the coaches or referees.  He even went to some of their college games to show his support.  Lloyd was awarded the Valley Heights Fan of the Year in 2014-2015.  He was also an avid University of Kansas fan.  Rock Chalk, Jayhawks! He grew up with a love of fishing and hunting.  He enjoyed trap shooting at Manhattan and Beatrice.  He was a member of the Sports Club Car of America (SCCA) and loved taking others racing with him.  In his earlier years, he was a member of the National Model Tractor Pulling Association (NMTPA) and loved flying u-controlled airplanes.  Lloyd enjoyed volunteering for Harvesters and whenever the ladies at the Blue Rapids Museum needed to test his memory.  He had a love of model trains and passing on that love to his great grandchildren.

Viewing is from noon to 8:00 pm, Wednesday, with visitation between 6:00 and 8:00 pm, at Christie-Anderes Funeral Home in Waterville.

Funeral services are at 10:00 am, Thursday, January 19, 2023 at the Waterville United Methodist Church with Pastor Berniece Ludlum officiating.  Bev Hedke will be the musician; Kim Oatney will sing “In The Garden”.  Other music will include a pre-recorded selection of “Wish You Were Here”.  Casket Bearers are: Ralph McCain, Randy McCain, David Boss, Blake Zimmerling, Richard Hull and David Hull.  Honorary Bearers are: Briana Zimmerling, Jim Wessel, Rick Boss, Joe Callahan and Richard Henderson.  Burial is at Riverside Cemetery in Waterville.

In lieu of flowers, the family suggests donations to either Harvesters Community Food Network or the Valley Heights girls athletics, which may be sent in care of Christie-Anderes Funeral Home at PO Box 61, Waterville, Kansas 66548.