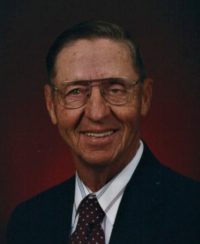 Merlin Potts, lifetime Riley County, Kansas, resident as well as farmer/stockman, finished his chores and passed away on October 10, 2022, at Ascension Via Christi Hospital in Manhattan at the age of 95.

He was born on February 15, 1927, at the home of his parents, Gideon and Carrie (Buss) Potts, in the Baldwin Creek community northeast of Leonardville. On March 1, 1934, at the start of the Dust Bowl when Merlin was 7, the family sold nearly everything they owned and, facing adversity, moved to a new farm southeast of Leonardville. Here he lived for over 88 years until, during his final 3 ½ months, his health failed so much that his family could no longer care for him at home.

A 1945 graduate of Leonardville Rural High School, Merlin’s favorite subject was arithmetic, which explains why he had a penchant for adding columns of figures by hand and why he served as treasurer for many organizations throughout his life.

Merlin took great pride in his farming and cattle, and was rewarded with the Riley County Soil Conservation award in 1991. He drove his son’s grain trucks and helped sort cattle and run the cattle head gate for as long as he was physically able. When he was no longer able to help farm, he still was very interested in what was going on and what Roger was doing. He passed time watching television game shows, as well as doing jigsaw puzzles and word find. Earlier in life, he enjoyed playing pitch and pinochle with family and friends.

With a love of all types of sports, Merlin participated as a young man in fast-pitch softball. It was during this time that his life permanently changed when he was struck in the left eye during pre-game warm-ups by an errant throw. Months later, he lost vision in that eye, making his subsequent athletic career even more amazing. Upon retiring from softball, Merlin seriously took up competitive horseshoe pitching, a sport enjoyed by his dad, uncles and cousins during Sunday afternoon Potts family gatherings. A photo of the 1948 Kansas State Horseshoe Pitching Tournament shows Merlin and his dad in the championship class. Merlin worked diligently to improve his pitching and won his first Kansas State title in 1964, winning 23 of the next 31 state titles. He owns the top three ringer percentage records in Kansas State Tournament history, and his 1984 record of pitching 79.04 percent ringers still stands. He began attending the World Horseshoe Pitching Tournament in 1966 where he was named “Outstanding First-Year Player” and was a men’s World championship class participant 22 times. In 1969, he pitched in one of the greatest games ever played, throwing 138 ringers out of 158 shoes (87.3 percent) only to lose when his opponent threw 147 ringers out of 158 shoes (93 percent). He was especially proud when son Roger also made the World championship class from 1985-1988, making them competitors. His personal record in competition was pitching 40 ringers in a row, and he was well-known for his courtesy and fairness with opponents. In 1993, he moved to the World senior division and won that championship in 1994. Merlin was also nine-time Kansas State elders’ champion later in his career, and he was inducted into both the Kansas State and World Horseshoe Pitchers Halls of Fame. His family nearly always accompanied Merlin to World Tournaments, turning them into family vacations and seeing many sights from coast to coast—but soon it was time to get home to whatever farm chore awaited.

Merlin was preceded in death by his parents, Gid and Carrie; older sisters Ivernia Stamback and Juanita Trumpp; brothers-in-law Eldon Stamback, Maynard Trumpp, DeWayne Lindquist and Arnold Lindquist; and father- and mother-in-law Ernest and Nellie Lindquist. Survivors include his wife of 70 years, Marlaine, faithful partner and caregiver, of the home; daughter Diane of Manhattan and son Roger of Leonardville; sisters-in-law Lydia Lindquist and Deanna Lindquist, Waterville; his double first cousin Eileen Hageman, Riley; and 13 nieces and nephews and their families.

Memorials have been established for the Kansas Horseshoe Pitchers Association or the American Heart Association.  Contributions may be left in care of the Anderes-Pfeifley Funeral Home.