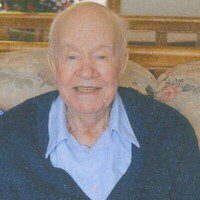 Robert attended District #21 and #1 Schools and graduated from Clyde High School in 1949 and Kansas State University in 1953 with a B.S. degree in Soil Conservation.

He served in the U.S. Army (Korean War).  He was a special Category Army with Air Force testing soils on airfields in Guam and Tinian Islands. After his discharge he started farming Southeast of Clyde, Kansas. Robert also raised cattle and had a feedlot until retiring in 1999.

Robert married Dolores A. Johnson at the First United Methodist Church in Clay Center on September 24, 1967.  To this union two children were born Eric and Karen.

Robert enjoyed reading, bowling, golfing, fishing and being with his family, especially the grandchildren.

He was preceded in death by his parents, 4 brothers, Warren, Elmo, Harold and Keith, his 2 nephews Raymond and Richard St. Pierre, a niece Trudy Johnson.

A Celebration of Life service will be held at 10:30 a.m., Tuesday, January 3, 2023 at the First United Methodist Church, Concordia with Pastor Kibum Kim officiating.

Burial will follow in Pleasant Hill Cemetery, Concordia, Kansas. Military honors will be conducted by the local American Legion Post #76 and V.F.W. Post #588 of Concordia at the church.  A meal will be served following the graveside service.