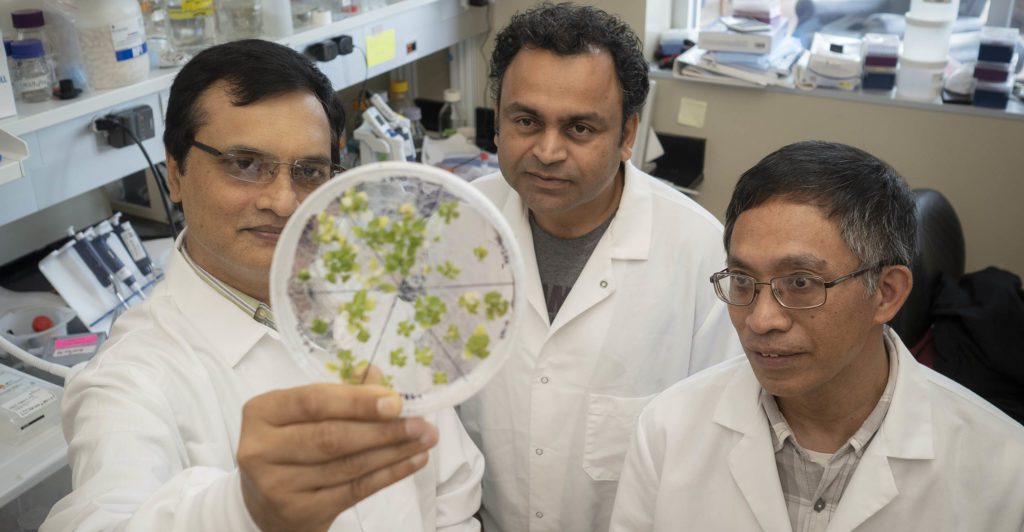 Stillwater, OK– Three scientists gained a new home last year at the Oklahoma State University Institute for Agricultural Biosciences where they are helping solve the problem of world hunger by improving nitrogen fixation and drought resistance in plants.

Molecular biologists Kiran Mysore, Bikram Pant and Jiangqi Wen, formerly of The Noble Research Institute, joined the OSU science community in June 2021 and will soon move into their long-term home – a renovated laboratory in Ardmore. These researchers are changing the world of crop production through genetic research with legumes, which include crops like peanuts, green beans and soybeans. The legume used in their research is from a clover family called barrel medic, or Medicago truncatula.

“Their research in plant molecular genetics is aimed toward gaining an increased understanding of how plants sense and respond to environmental challenges,” said Randy Allen, director of IAB. “These scientists have generated hundreds of scientific publications and obtained millions of dollars in funding. I am confident this research success will continue. The long-term goal is to develop new technologies and scientifically based management strategies to improve agricultural productivity and sustainability.”

The three scientists brought with them a library of 21,700 mutant (Tnt1) lines of M. truncatula, which has unique genetic traits that stem from its symbiotic relationship with bacteria called rhizobia. This mutant population has more than 500,000 identified mutant gene sequences from the species, which are housed in an online searchable database. The collection is the largest legume mutant population in the world.

“Over the last 16 years, we have distributed more than 15,000 lines of this collection to scientists at more than 150 research organizations in about 28 countries,” Wen said. “It increases OSU’s impact reach because people now acknowledge they received that material from the university.”

Scientists can use the genetic resources from these legume plants to determine which M. truncatula genes cause certain characteristics, such as a plant’s ability to take in nitrogen. This information has the potential to benefit other crops. By comparing a mutant line to a normal M. truncatula line, scientists can figure out what their differences are and why those differences occur.

Legumes play an important role in maintaining the world’s ecosystem because their relationship with rhizobia gives the plant the ability to convert nitrogen from the atmosphere into ammonium, which a plant needs to grow. Other plants also naturally take in nitrogen but not on the same level as legumes. For other plants, 90% of nitrogen must be added into the soil by producers. In fact, more than 50% of scientists using the M. truncatula mutant library are using it to understand the species’ ability to fix nitrogen, according to Wen.

Mysore and Wen helped identify the role a nodulation gene plays in converting nitrogen into ammonium. Understanding the process of of genes like this has the potential to allow scientists to improve the natural absorption of nitrogen in other plants.

“We have the potential to enhance or delay flowering time based on the need. We could place it in alfalfa and get almost double biomass of the plant, and therefore, increase its yield,” Wen said.

More than 200 high profile scientific papers have been published on research using M. truncatula mutants generated by Mysore and Wen.

“This collection of thousands of seeds from Medicago truncatula supports international research by supplying unique seed stocks to scientists around the world,” Allen said. “This rich source of genetic diversity has resulted in major research breakthroughs and supported dozens of research programs.”