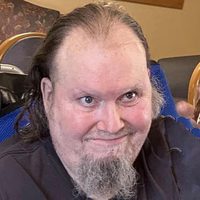 He raised prize winning chickens for his 4-H projects and out cooked the girls in his 4-H cooking class.  While on the farm, his favorite pet was his bird dog, Sandy.

Larry attended school in Caldwell and graduated from Caldwell High School in 1970. He also went to junior college in Arkansas City.  After a traumatic accident in Arkansas City, he spent several years living in a rehab facility in Kansas City and then moved to Clay Center to be closer to family.  While in Clay Center, he worked for Gilmore-Tage and Big Lakes.

Larry also participated in a couple chili cook offs and won.  His chili was appropriately name “Dragons Breath”. According to his sister, he made the best chocolate chip cookies but refused to give out his recipe.

He was preceded in death by his parents and younger brother, Donald Martin. Larry is survived by his sisters, Sharon (Paul) Houston of Manhattan, KS, Merrie Martin of Wichita, KS, Joan Martin of Topeka, KS and Loretta (David) Kordyak of Manhattan, KS. He is also survived by many nieces and nephews.

A time of remembrance will be held at the Neill-Schwensen-Rook Funeral Home in Clay Center, KS on Saturday, August 6, 2022, from 9-11 AM.

The family requests that you bring an item that reminds you of Larry along with its story.

Memorials can be made to CCARE c/o of the funeral home.