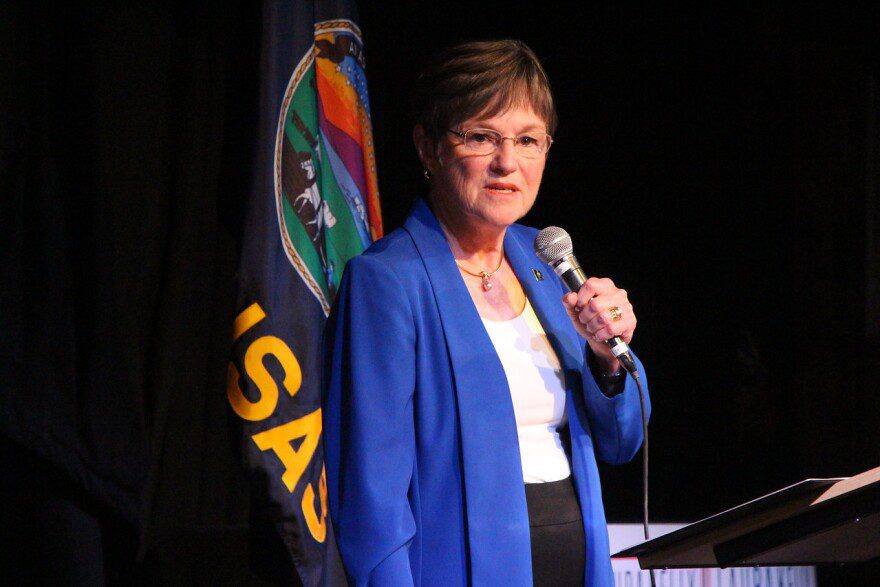 Topeka, Kan. — Democratic Kansas Gov. Laura Kelly used her veto pen Thursday to strike down a congressional redistricting plan pushed by Republicans that critics say was gerrymandered to hurt Democrats.
The veto sets up an override fight in the Legislature driven by the Republicans who drew the map.
After her veto, Kelly issued a statement saying courts and the Legislature have laid out rules for drawing districts of equal population without diluting minority votes or breaking apart communities.
“(The map) does not follow these guidelines and provides no justification for deviation from those guidelines,” Kelly said.
She specifically pointed to the map dividing racially diverse Wyandotte County and including Lawrence in the 1st Congressional District that covers western Kansas.
“I am ready to work with the Legislature in a bipartisan fashion,” Kelly said. “Together, we can come to a consensus and pass a compromise that empowers all people of Kansas.”
Republicans have enough votes to override a veto if the GOP caucus sticks together.
Republicans blasted her veto, with a joint statement from Republican House leaders saying it was prompted by partisanship. They hinted at more fighting ahead, likely a reference to a veto override attempt.
“The Legislature is bound to do what is best for Kansans and we won’t back down from that responsibility,” House Republican leaders said in the statement.
The proposal draws districts for the state’s four seats in the U.S. House of Representatives. Kansas lawmakers must draw a new map every 10 years to account for population shifts documented in the U.S. Census.
The redistricting plan has drawn criticism from Democrats who say it’s aimed at diluting the votes of left-leaning communities and people of color in an effort to defeat the state’s lone Democratic member of Congress.
“(It’s) a map that makes no sense for Kansas unless you see congressional districts as a means to one-party control,” Senate Democratic Leader Dinah Sykes said during debate on the plan.
U.S. Rep. Sharice Davids, a Democrat, holds the 3rd District seat in the Kansas City area. The plan would split part of Wyandotte County away from the 3rd District and add Republican-leaning rural counties southwest of the Kansas City area.
The liberal enclave of Lawrence would also be shifted from the 2nd District into the large, conservative 1st District that stretches to the Colorado border.
Overriding Kelly’s veto takes a two-thirds vote of both chambers of the Legislature. That means 27 votes in the Senate and 84 in the House. The bill originally passed the Senate with 26 votes and the House with 79 votes, although both chambers had members who were absent or voted “present.”
Even if lawmakers do override the veto, some legal experts have predicted a court challenge to the plan.
Jim McLean is the senior correspondent for the Kansas News Service. You can reach him on Twitter @jmcleanks or email jim (at) kcur (dot) org.
Stephen Koranda is the news editor for the Kansas News Service. You can follow him on Twitter @Stephen_Koranda or email him at stephenkoranda (at) kcur (dot) org.
The Kansas News Service is a collaboration of KCUR, Kansas Public Radio, KMUW and High Plains Public Radio focused on health, the social determinants of health and their connection to public policy.
Kansas News Service stories and photos may be republished by news media at no cost with proper attribution and a link to ksnewsservice.org.
PrevPreviousSports Officials in Kansas Are Leaving the Industry But Why?
NextVillage Manor Receives Five Star Rating From Centers for Medicare and Medicaid ServicesNext