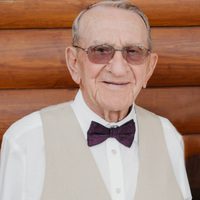 Harlin L. Hornbostel, 96, of Clay Center died Friday, December 30, 2022 at the Clay Center Presbyterian Manor.  He was born October 12, 1926 in Palmer, Kansas the son of William and Marie (Pruser) Hornbostel.

He grew up near Palmer and attended the Elliot School, Palmer Grade School and graduated from Linn High School in 1944.  He served in the US Army during WWII.  He farmed with his parents while working for Toburen Implement Company and the Linn Creamery.  Harlin married Retha McCann on December 26, 1950.  He then worked as the Postmaster of the Palmer Post Office for 35 years.

He is preceded in death by his parents, son, Jeffrey, 2 brothers Theodore and Gilbert and sister, Bernice Rieger.

Funeral Services will be held on Wednesday, January 4, 2023 at 10:30AM at the First Presbyterian Church in Clay Center, Kansas.

Burial will be in the Greenwood Cemetery, Clay Center, Kansas.

Visitation will be held on Tuesday, January 3, 2023 from 3-6PM, with the family greeting friends during that time, at the Neill-Schwensen-Rook Funeral Home, Clay Center, Kansas.

Memorials may be made to the Harlin Hornbostel Memorial Fund to be designated later by the family sent c/o the funeral home.